What Is the Average Time to Replace a Car Battery?

This procedure usually takes between 15 and 30 minutes to perform. This time depends on the type of car, how easy it is to get to the battery, and how long it takes to take the battery out of the car. It is also determined by the experience of the individual executing this work. For example, if this is your first time changing the battery, it may take longer than it would with an experienced mechanic.

Car batteries are the strong, quiet member of the automotive team. They perform their jobs regardless of the heat, cold, or the drivers who expect so much of them. While a battery that allows a car to start on the first turn of the key is a delight, it does not endure indefinitely.

In reality, depending on where you live and how you drive, the state of your charging system, and a number of other factors, a car battery will typically last four years. And when it does fail, there is usually no warning – your automobile simply dies.

While the lead-acid automobile battery hasn’t evolved much in the previous century, testing has become simpler. Simple battery tests cannot yet navigate the molecular complexity of what happens in a battery. Instead, they give a snapshot of the battery at the moment of testing, without the context of the battery’s chemical composition before to or after the test. Fortunately, this picture will assist you in keeping track of the issue.

As a result, the rule of thumb for battery replacement is straightforward: You have around four years before the battery begins its transition from a chemical powerhouse to a chemical paperweight. Start looking for signs (which we’ll go over in a minute) and be ready to take action after four years.

But because of the way the chemicals in a battery mix together, it may die before you think it should or last for several years longer.

Keep in mind as you read that batteries for hybrid and electric vehicles differ slightly, and this article will mostly address batteries for automobiles with traditional gasoline engines.

It is simple to test the juice in your car battery, and it can save you from being trapped in a dead automobile.

When it comes to car maintenance, “normal” is governed by a variety of theoretical but seldom realized elements. A battery, for example, has a typical lifespan of four years under normal conditions. In this context, “normal” indicates that the battery is exposed to complete charge cycles, is not subjected to severe temperatures, is connected to a dependable and consistent charging system, and is not powering a large number of accessories.

But normal isn’t normal at all. Temperature fluctuations, vibration, brief journeys down the street, and an ever-expanding assortment of cellphones, aftermarket navigation systems, and other gadgets all take their toll on the battery in the real world.

When you look at a standard lead-acid maintenance-free automobile battery, you can see why these variables impact regular battery life. Plates of materials such as lead and lead dioxide are contained within the plastic box. The plates are suspended in an electrolytic solution made of water and sulfuric acid. This solution permits electrons to pass between the plates, which is equivalent to electricity.

This chemical process can be disrupted by a variety of causes. Vibrations from severe travel or a poorly secured battery might cause the plates to shake free or be damaged. Extreme heat accelerates the chemical process, reducing cell life, but extreme cold can occasionally extend battery life by delaying the reaction. To keep high temperatures at bay, some batteries are encased in an insulating sleeve.

Driving style might also influence reaction time. Starting the automobile requires a significant amount of power, thus the charging system must intervene to replace the battery. That implies that if you have a short commute or make frequent short journeys, the battery will never be fully charged. Acid stratification occurs as a result of the continual condition of undercharge.

The electrolytic solution within the battery transitions from homogeneous — or the same all the way through — to a rough vertical divide. The solution’s upper half is a weak acid, while the bottom is a heavy acid. The light acid layer will begin to erode the plates, and the heavier acid solution will begin to compensate for the car’s electrical requirements by working harder than it was supposed to function. As a result, even if the battery passes standard tests, it has a decreased battery life. 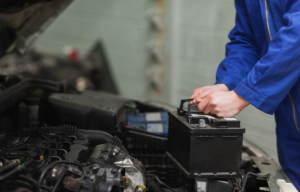 Batteries are so dependable and straightforward that drivers often forget they exist until it’s too late. You may lessen your chances of being stuck on the road by paying attention to your car’s battery and doing a few frequent checks and inspections. Batteries are quite affordable when compared to the amount of work they do on a daily basis.

A dead battery is the most evident indicator of a battery problem. However, because the battery is part of a bigger system that is linked to other sections of the vehicle, a dead battery may signify a more serious problem than merely a lack of power. If anything else is wrong with the electrical system, such as a faulty alternator, a functional battery may provide less power than it should.

The electronic testers available at most auto parts stores are the best way to test a battery. When you or an automotive expert connect the tester to your car’s battery, it will take a picture of its status and determine if it needs to be changed.

There are several types of battery testers available at various pricing ranges. Some attach to the battery or its terminals to offer a reading, while others plug into the cigarette lighter in your car to measure the charge. Wear gloves and goggles if you’re opening the hood to attach a tester to the battery to protect your hands and face from battery acid or corrosion.

This check should be performed as part of normal vehicle maintenance and at every oil change.

Remove your battery’s casing or insulating sleeve every now and again to observe what’s going on below. Check for accumulation around the terminals as well. You may remove the buildup using baking soda and water if you use gloves and safety glasses while working. The electrolytic solution contains sulfuric acid, which is harsh on the skin. Finally, inspect the battery for rotten egg scents (sulfur) or the smell of the battery overheating.

How to Replace an Auto Battery?

Changing a car’s battery is a simple job that might be part of a regular maintenance plan. While there appears to be a bewildering number of batteries on the market, Consumer Reports reports that three firms — Johnson Controls Industries, Exide, and East Penn — supply the majority of the maintenance-free batteries used in the United States today. Each firm makes batteries that are marketed under several names by different companies. In the end, the battery’s brand name is unimportant. Age, cold cranking amps, reserve capacity, and group size are all important considerations.

Batteries often have a manufacturing date on them and should be sold within six months of that date. Before you buy, double-check the date. The date is frequently coded. Most codes begin with the letter of the month, such as A for January, B for February, and so on. The number represents the year, such as 0 for 2000 or 1 for 2001.

The group size dictates the outer dimensions and location of the battery connections. Check that the group size of the battery you’re replacing matches that of the one you’re replacing; otherwise, you can end up with a battery that’s a different size and configuration than your vehicle can utilize. Fortunately, most battery retailers organize them by automobile make, model, and year.

CCA (cold cranking amps): This is a measurement of a battery’s ability to start a car at 0°F (-17°C), when the engine oil is thick and the battery’s chemical potential is low. The greater the CCA, the better it will start in cold temperatures. On the battery tag, most batteries mention this, however, others simply list CA, or cranking amps. CA is generally a higher value and is measured at 32 degrees Fahrenheit (0 degrees Celsius). It does, however, provide a less realistic judgment of how well the automobile will start in cold weather.
Reserve Capacity: This is the most difficult quantity to find, but it is also one of the most useful. It tells how long your vehicle can run on battery power alone if the alternator fails unexpectedly. It is normally found in the battery literature, either in the store, online or on the battery itself.
If you follow these guidelines, you should be able to weather the worst that a faulty battery can throw at you and find a dependable replacement when you need it.

As previously stated, this information refers to standard automobile batteries that assist in starting a vehicle. When driving a hybrid or plug-in hybrid car, batteries are an essential component of the powertrain.

According to Green Car Reports, the typical rule of thumb for hybrid car battery replacement is 10 years, however, there is a lot of variety within that guideline. This is because different types of batteries are available for different cars, and because many of these vehicles are relatively new, there simply isn’t enough data to illustrate how they perform over time. Your best bet is to replace the battery in your hybrid automobile every 10 years. However, at that point, you may be tempted to simply get a new hybrid automobile, since battery technology in this area is always becoming more affordable and efficient.

How frequently should I change my car battery?

The longevity of your automobile battery is determined by a variety of elements, including the charging method, driving frequency, weather and temperature conditions, and many more. A vehicle battery should last three to five years if properly maintained.

What is the cost of replacing a car battery?

If your battery dies, a replacement will typically cost between $50 and $200. The cost varies according on where you reside, the type and size of the battery, and labor charges.

Can I change my own automobile battery?

Yes, automotive batteries may be replaced on your own. First, confirm that your car is completely switched off. Remove the terminals from the old battery with a socket wrench and carefully lift it out. Insert the new battery into the holder and secure the positive and negative connections with the wrench. Place the key in the ignition and wait one minute before starting it.

Which battery terminal do you disconnect first?

What are the symptoms of a failing car battery?

Longer starting times in cold weather, sluggish engine cranking, trouble starting the car, problems with the sound system, and fading headlights are all indicators of a faulty battery. If you experience any of these symptoms, have your battery tested.

Related posts
How cold is too cold to sleep in car? 8 Survival tips
Why does my car alarm keeps going off?
Why does your car smell like a dead animal?
Why car rental is so expensive now?
Why does your car need a regular oil change?
How long to jump a car battery?
Why is car registration so expensive in USA?
How to clean car windows with vinegar? A Step-by Step-Guide